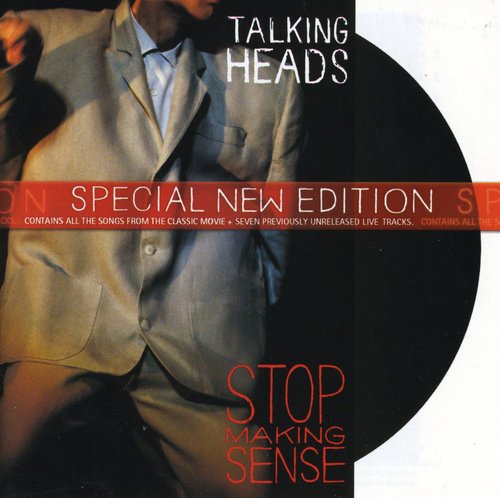 This new edition of Talking Heads' classic 1984 live concert album features all the songs from the original LP, plus the film's 7 previously unreleased tracks! For the 1st time, the entire song lineup is presented, and digitally remastered. From '77s "Psycho Killer" to '83s "Burning Down the House," from "Take Me to the River" to Tom Tom Club's "Genius of Love," this release finally offers the complete, definitive version of one of the landmark albums in rock history!

Stop Making Sense is a live 1984 album by Talking Heads, the soundtrack to the film of the same name. The original release of the album features only nine of the songs from the movie, many of them heavily edited. The album spent over two years (118 weeks) on the Billboard 200 chart. In 1999 a 16-track re-release coincided with the concert's 15th anniversary.

Byrne's intention was not to make a traditional soundtrack album, but to have it be a separate experience. Limited pressings of the original LP version featured a full color picture book wrapped around the album jacket. Regular versions had many of the pictures and captions on the album's inner sleeve. In 1999, to correspond with the theatrical re-release of the movie, the album was extended and remastered, restoring all of the songs from the movie with only very minor edits. The newly included tracks feature Frantz's original drumming from the concert recordings. In 2003, the album was ranked number 345 on ''Rolling Stone'' magazine's list of the 500 greatest albums of all time. - Wikipedia